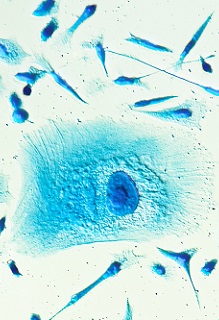 Brand new research has uncovered the biological pathways by which fucoidan can combat cancer cells.

Undertaken at the University of Tasmania, the in vitro research utilised Maritech® fucoidan extracts from the Undaria pinnatifida species of brown macroalgae.

Brown seaweeds have a long history of use in complementary medicine with fucoidan, in particular, holding significance in integrative oncology. It is common for fucoidan-containing supplements and drinks to be administered to cancer patients in many Asian countries today.

The anti-cancer effects of Maritech® fucoidan have been demonstrated in preclinical animal and in vitro studies, including reducing tumour growth and enhancing the therapeutic effect of chemotherapy. Yet the specific mechanism of action through which fucoidan promotes these benefits has remained unclear – until now.

In this latest study, researchers identified that Maritech® fucoidan beneficially affected a number of anti-cancer pathways. These include cell cycle arrest, DNA damage, RNA metabolism and protein synthesis. The findings indicate that fucoidan can limit cancer cells in their ability to make proteins, utilise energy and replicate.

Importantly, the research showed that Maritech® fucoidan works selectively against cancer cells but not against normal, healthy cells that were used as a control.

This research further demonstrates the safety of fucoidan as an adjunct to cancer therapy.

Marinova Chief Scientist, Dr Helen Fitton, explained that this was the first study to screen fucoidan against a gene library to investigate all possible pathways of action.

“This research is exciting as we now have a more complete picture of how fucoidan delivers its anti-cancer effects. These findings provide new insight for further research and the development of new complementary therapies.”

The research has received significant attention in the nutraceutical industry, with potential to shape future research in the cancer area and better direct the development of new complementary products. Read articles published in Nutrition Insight and Nutraingredients.