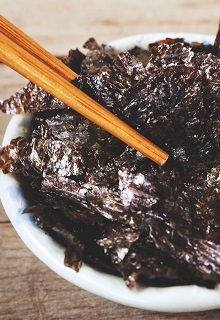 A new study has revealed that brown seaweeds offer a rich source of protein, vitamins and amino acids.

Results found that Fucus vesiculosus contained the highest protein levels out of the three species. Interestingly, protein levels in seaweed are reported to vary throughout the year, with maximum levels occurring in winter and the beginning of spring.

All three species of brown seaweeds were found to be a rich source of vitamins, minerals and trace elements. Fucus vesiculosus presented the highest calcium and iron contents, whilst Ascophyllum nodosum showed high magnesium and sodium levels. The seaweeds were also abundant in essential amino acids, especially high in glutamic acid, aspartic acid and alanine.

Additional studies have confirmed the value of seaweed as a calcium source. Undaria pinnatifida seaweed – commonly known as wakame – was shown in a particular study to have eight times more calcium than milk. This finding suggests a possible use for this seaweed in preventative applications targeting osteoporosis and related health areas.

Seaweed is well recognised as an excellent source of macro- and micro nutrients. This study reaffirms the nutritional value of brown seaweeds and the potential health benefits of a seaweed-rich diet.